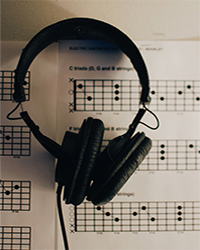 × This class focuses on exploring creative songwriting and sound art practices, studio and recording techniques, the making of demos, the use of digital audio workstations (focusing on Garageband), virtual instruments, step sequencing, basic mixing techniques, field recordings, writing music for film, and soundscapes. Some familiarity with Mac computers recommended. *Note: a substantial portion of this class will occur at LIFT.

Lisa Conway is a composer, songwriter, artist, and producer. She holds a BFA Honours in Music from York University, and an MA in Sonic Arts from Queen’s University Belfast. From fall 2015 to 2016, she was a Slaight Music Resident at the Canadian Film Centre, and was one of two Canadians selected for the renowned Red Bull Music Academy 2018 in Berlin. She’s received praise for her releases as L CON from The Fader, Uproxx, Earmilk, Tiny Mix Tapes, CBC, Exclaim, Now Magazine, and The Toronto Star, and her collaborative and solo work has been heard at Ontario Place, the Art Gallery of Mississauga, the Sonic Arts Research Centre (Belfast), the Toronto Harbourfront Centre, the imagineNATIVE Film Festival, TIFF, and Summerworks, among others.