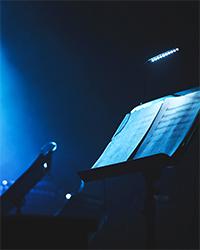 There's no denying that the Spring sessions proved quite the challenge to figure out on the fly, but armed with that strange semester under their belt, award-winning artists Jim LeFrancois and Rob Joy are pleased to offer a revamped virtual edition for the Bruisers this Fall. As is key to this initiative, the Choir provides a positive start to the week -- offering good measures fellowship, physical grounding and creative collaboration. This fall we will tackle new repertoire, and will also take on a few new challenges befitting a virtual edition, including: weekly solo assignments for two Choristers each week (everyone will get a turn), singing for the camera and we will also tackle conceptualizing, creating and recording an audio and visual performance of the Choir -- tackling the challenge of how to create group vocals while not in the same room!

Join us in maintaining musical momentum until we can sing together in person and take part in live performances.

This class will not count towards your maximum registered classes.

About the Instructors Jim LeFrancois is an award-winning artist & producer. He is a trained pianist & singer who holds a BFA in Musical Theatre Performance from the University of Windsor. Jim enjoyed a 10-year stint with Buddies in Bad Times Theatre as Artistic Producer where he received a Dora Mavor Moore Award for Outstanding New Musical for his work on Buddies’ 2007-08 Season Opener, ARTHOUSE CABARET created with David Oiye. He was the inaugural winner of the Leonard McHardy & John Harvey Award, administered by the Toronto Alliance for the Performing Arts, which recognizes 10 years of commitment to the performing arts. Jim is also the recipient of a Harold Award & a Silver Medal from the Royal Conservatory of Music.

Rob Joy has been touted by Toronto Life magazine as “One of Toronto’s biggest names in Pint-sized entertainment” and past winner of the Parent’s Choice Award for children’s entertainers (City Parent Magazine). Before he was a children’s entertainer, he toured and recorded with bands Sid Six and Shadow puppets. His songs have appeared on television series Dawson’s Creek, Strong Medicine and Witchblade and he won top prize in the Unisong international songwriting contest in 1997. Currently, he performs in the duo Soli & Rob and produces musical puppet shows for performance in schools, theatres, libraries and child care centres in Southern Ontario. In March 2019, he opened for Fred Penner at Roy Thompson Hall.

Rob met Jim Lefrancois while attending Etobicoke School of the Arts in 1989. They sang together in “Solstice”, a student-run rock music concert which Rob created. Solstice has become an annual event, remounted by the students at this high school to this day. When Jim approached Rob with the idea for the “Bruised Years Choir”, Rob was delighted to collaborate with his dear old friend.