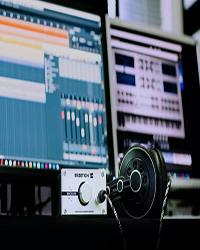 All participants will make an audio soundscape or song recording that will be showcased on the Workman Arts Soundcloud account.

** Garage Band is only available on Apple devices. If you would like to reserve an iPad to use Garage Band for the duration of this course, please identify in your interest in your registration notes. A limited number of iPads will be available on loan.**
About the Instructor
Lisa Conway is a composer, songwriter, producer, and sound artist, who has composed for and collaborated with filmmakers, dancers, and performance artists, and completed creative residencies from New Brunswick, Canada to Aubagne, France. Her work marries acoustic materials with analog and digital technologies, blending traditional song narratives, experimental production approaches, avant-garde compositional structures, and pop sensibilities.

Raised in the mountains of Northern BC, and nominated for a Canadian Folk Music Award before she was allowed to drink in bars, Lisa has been quietly producing, recording, and releasing music under various monikers for over a decade - she’s collaborated with filmmakers, dancers, and performance artists, been nominated for a SOCAN Songwriting Prize, and completed creative residencies from New Brunswick, Canada, to Aubagne, France. A recent alumni of the Canadian Film Centre’s Slaight Music Residency, and one of two Canadians selected to be part of the renowned Red Bull Music Academy 2018 in Berlin, her work both in live performance and in the studio has garnered critical acclaim. In 2013, she was granted a Canada Council of the Arts professional development grant to pursue a Masters in Sonic Arts from Queen’s University Belfast, and graduated from the program with distinction.

In her creative practice, she embraces continual experimentation and artistic growth, and always strives to make sincere work.